This is a new conversation series by Donna Kennedy-Glans, a writer and former Alberta cabinet minister, featuring newsmakers and intriguing personalities. This week: MP and provocateur Michelle Rempel Garner. 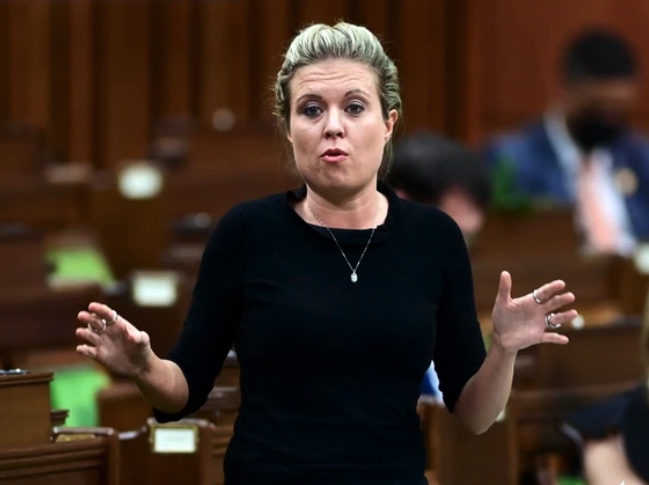 One of the "in-charge" Gen-Xers: Conservative MP Michelle Rempel Garner speaks in the House of Commons.
PHOTO BY SEAN KILPATRICK/THE CANADIAN PRESS/FILE

She likes her meat raw.

It wasn’t always that way for Michelle Rempel Garner. An Alberta girl who grew into politics, well-done didn’t matter when she was a young rising star and her looks could kill. Now, she’s a voice for “Gen X, the in-charge generation,” she declares, plunging the steak knife into the heart of the strip loin on her plate.

I’m one of those Baby Boomers, part of the generation that, in Michelle’s opinion, no longer dictates commerce and governance in Canada.

Scribbling notes in a Moleskin notepad on a white linen-clad table at the Rose Bowl Chophouse on Preston Street in Ottawa’s Little Italy district, I flinch, and look up to see if Michelle realizes she’s just written off my whole generation.

When the House was still in session (it’s now on its holiday break), I invited Michelle to dinner and an interview, to talk about where she’s focusing now that the Conservatives have decisively crowned Pierre Poilievre, another Gen-Xer, their Trudeau-slayer.

While it might have been easier to meet at a franchise restaurant near the Hill, Michelle prefers that we meet out of the bubble for, in her words, “good, really well-priced steak.”

Dining out on corn-fed Ontario beef whilst interviewing a federal politician from Alberta made my head spin a little, but only a little.

I arrive at the restaurant early to secure a quiet table at the back of the restaurant; the staff is friendly and, on request, turn down the volume on Prince’s Purple Rain so I can record our talk. We are ensconced behind a wall of red Italian wine in a back room wallpapered in gigantic red roses.

At 42 years old, Michelle still turns heads, even at a dimly lit restaurant on a Tuesday night in Ottawa. She is famished, not having eaten since breakfast (and then, only a bagel), and decisively orders a wedge salad, rare steak and mushrooms. We both contemplate, then decline, wine.

Michelle is well aware of her power as a savvy social media influencer; she knows how to stir up ideas that invariably land in the mainstream. And we talk about that approach, starting with her risky public endorsement of the so-called Buffalo Declaration — loose ideals about positioning Alberta and Saskatchewan more effectively within Canadian federation.

With Premier Danielle Smith stoking (and legislating) new talk of sovereignty-association in Alberta, I want to understand where exactly Michelle stands on this unwieldy notion.

Michelle hadn’t talked with Smith about sovereignty but she’s convinced that the Buffalo Declaration influences Smith’s thinking, and that’s precisely what was intended. The Buffalo Declaration, Michelle explains, was provocative but purposefully structured to explain the roots of western Canadian alienation.

The manifesto wasn’t intended as a set of definitive fixes; it was meant, somewhat like Jason Kenney’s Fair Deal Panel (of which I was a member), to put the problem on the table and open up space for debate on possible solutions.

Even if that’s uncomfortable.

Michelle isn’t pulling her punches, and now, married to Jeff Garner, an American soldier who has served in special ops in Afghanistan and Iraq and knows what end of the stick to use in a firefight, I am curious to know what she’s learned since tying the knot.

She may not have launched into politics as a warrior, but she’s learned she has to swim or she’ll sink and she’s stopped pretending that she needs to be liked. Disruption for the sake of disruption may not be her modus operandi but she’s also not willing to be manipulated by those in the party who construe constructive dissent as disloyalty.

There are a lot of unknowns.

It remains to be seen how Pierre Poilievre will handle diversity of opinion within his caucus, or the opening up of thorny issues to wider debate. Some business leaders in Canada prefer a government that dictates clear policy directives, Stephen-Harper style. Open-ended and public policy discussions can be unnerving.

We don’t yet know how Poilievre will lead. He talks openly to truckers, but how will he talk to Canadian business?

“Did you talk to truckers on the Hill?” I ask. Michelle’s not saying.

At the end of dinner, I feel a small pang as Michelle places her unfinished steak in a box to take home and cook up with eggs for breakfast; grist to fuel another day in the House of Commons trading barbs with the Liberals and NDP on the government’s proposed increases in the carbon tax.

As an MLA in Edmonton, I hated eating breakfast alone.