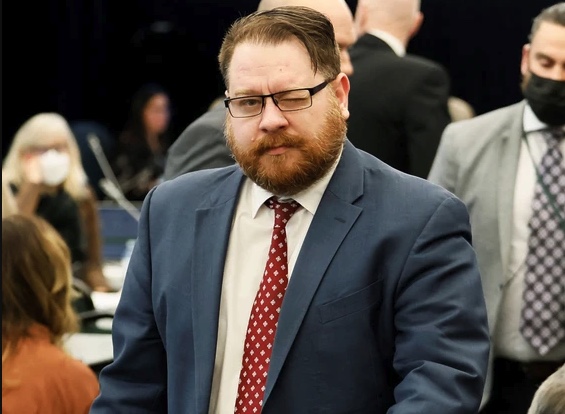 Freedom Convoy lawyer Brendan Miller appears to give a wink as he is kicked out of the Public Order Emergency Commission hearings in Ottawa, on November 22, 2022
PHOTO BY BLAIR GABLE/REUTERS/FILE

When I catch up with Brendan Myers Miller — after his brawling stint in Ottawa as lead counsel on the team of lawyers representing the truckers at the formal inquisition of our country’s highest-ranking politicians and their decision to use the Emergencies Act — he’s just landed at the Magic Kingdom with his family.

If you want to know what’s driving the Freedom Convoy, and perhaps the Alberta government’s push for greater sovereignty, Brendan is the lawyer you need to talk to.

And so I do, albeit via FaceTime, with me bundled up in a wool turtleneck gulping hot coffee in frigid Calgary with a yet-to-be-decorated Christmas tree in the background whilst Brendan sports a purple golf shirt in sunny Florida smoking a cigarette on a patio that overlooks a savannah of pacing giraffes and shrieking young children. The sounds trigger fond memories of being there with my own sons, decades ago.

I’ve had several text exchanges with Brendan over the past few weeks, starting about the time he went off the rails, risking his reputation in my opinion, accusing people of flying Confederate and Nazi flags, and then again when he did something totally out of character for a scrappy, in-your-face litigator, choosing not to cross-examine Prime Minister Justin Trudeau on the final day of the inquiry. That really got my attention.

“What were you thinking?” I ask, pointedly, the lawyer-part of my brain in overdrive. Brendan assures me, he was just doing his job, “acting as a shield for my client.”

And he’s not backing off this ledge. Brendan is not going to apologize to Brian Fox, the guy at Enterprise Canada who he claimed was carrying an offensive flag at the trucker protests in Ottawa.

As to why he left Ottawa early and didn’t cross-examine Trudeau, Brendan’s explanation is jarring. He was getting threats, serious ones, to the point where his team hired a security detail to protect him.

“I’m used to being slimed,” he says, but this was a step outside his comfort zone. Why didn’t he call on the RCMP or CSIS for help, I can’t help but wonder.

“How did you land this high-profile gig?” I ask. We both know that, handled well, the opportunity to represent the truckers in their fight against Ottawa is a career-maker for a 39-year-old lawyer from Alberta.

Brendan says he was approached by two lawyers already representing the truckers: Eva Chipiuk of Edmonton (counsel to former Newfoundland premier Brian Peckford’s challenge of the federal pandemic travel ban, Tamara Lich and the Freedom Convoy) and Keith Wilson of St. Albert, near Edmonton (counsel to the truckers and called to testify as a witness at the inquiry).

Wilson made himself famous over a decade ago, accusing the then Progressive Conservative government in Alberta of thwarting property rights to build electricity transmission lines across the province, and in doing so, prompted disgruntled Albertans to join the Wildrose Party in droves.

And here we are in 2022, with the former Wildrose leader, Danielle Smith, premier of Alberta.

Wheels are spinning in my head. How connected is this Freedom Convoy to the sovereignty push by Premier Smith, I ask.
Brendan doesn’t blink. Or wink.

By the way, Brendan, did you really wink to the cameras when the head of the inquiry tossed you out of the room? He nods in the affirmative, and smirks. Getting himself kicked out of the inquiry was part of his team’s strategy.

I’m more direct: Brendan, were you in any way involved in the design of Alberta’s new Sovereignty Act? This conversation, I realize, is starting to feel like an inquisition.

He denies any formal role but has strong opinions on how federalism can be improved in Canada. He’s a constitutional lawyer; his opinions are grounded in knowledge of the legal underpinnings of Canada’s political governance systems.
“The country doesn’t need amendments to the Constitution,” Brendan asserts, “we need a federal government willing to delegate.” If the feds are willing to create an exception under the criminal code to allow the decriminalization of narcotics in British Columbia, why won’t they listen to provincial governments and exempt Alberta under the firearms legislation?
Brendan has spent months digging into the evidence, talking to the truckers and trying to construe heavily redacted notes and emails that explain the government’s decision to invoke the Emergencies Act.

Brendan acknowledges the likelihood that no one in the federal government is really listening.

Our conversation ends abruptly with the arrival of Brendan’s wife and young daughter. They are eager to head off and enjoy Disney World.

I exit the call with a twinge of apprehension.

Like the truckers he represents, Brendan wants your attention. All this bluster and drama is the only way to get it.
You may not like what he has to say, but you need to listen.