You can’t destroy an energy system built on hydrocarbons without having a reliable alternative in hand. 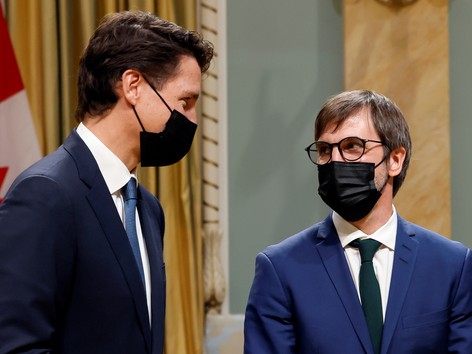 When German Chancellor Olaf Scholz came to Canada last month hoping he could rely on Canadian natural gas to help ease Europe’s dependency on Russian energy, Justin Trudeau offered him a blue-skies hydrogen development but didn’t commit to liquefied natural gas (LNG) exports. Ottawa says it won’t stand in the way if the private sector wants to build new export facilities but everyone understands the real political deal on energy in Canada.

It comes in two parts: First, Trudeau and Steven Guilbeault, his activist-turned-politician minister of environment and climate change, will continue to champion an ambitious climate agenda regardless of what’s going on in the rest of the world. And, second, Ottawa is politically afraid of Quebec and will stand by and watch rather than challenge Premier François Legault’s exercise of a veto on pipelines or future oil and gas development in Quebec.

Five years ago, there was or at least seemed to be the makings of a very different deal on energy in Canada. It went like this: Alberta steps forward on carbon reduction and mitigation and the rest of the country relents on hydrocarbon exports. Alberta did step forward but the rest of the country hasn’t lived up to its end of the bargain.

How do I know? I was there as that deal was being shaped. In the final years of the Progressive Conservative government in Alberta, people in the province understood the need to get on board with a federal climate plan. In 2013, I was named the province’s first minister responsible for electricity and renewable energy and that meant figuring out ways to phase out coal-fired electricity, put a price on carbon and invest in renewables. When the NDP was elected in 2015, Premier Rachel Notley implemented a carbon tax, accelerated the phase-out of coal-fired electricity (which required investment in electricity infrastructure, buyouts of coal plants and significant investment in renewables) and put an admittedly loose-fitting cap on oilsands emissions.

What has Ottawa done in return? Earlier this summer, Guilbeault moved the cap from the oilsands to the entire oil and gas sector, where it’s a much tighter fit. Private-sector actors in the Canadian energy sector understand the need to transition the oilsands and other hydrocarbon energy resources to lower carbon intensities. Investors, lenders, corporate employees and consumers increasingly demand decarbonization. But you can’t destroy an energy system built on hydrocarbons without having a reliable alternative in hand.

The Germans and the Brits wreaked havoc on their hydrocarbon-based energy systems for the last decade and Russia’s war in Ukraine has now awakened them to the dangers of destroying one system without having another to replace it. Even Elon Musk, founder of Tesla and champion of electric vehicles, said as much in Norway recently: fossil fuels are needed right now to keep civilization functioning until we can reach sustainability with renewable energy. That is especially true for a northern country like Canada.

Most of us would like to think we are pragmatists. But there’s no denying that partisanship and old rivalries between provinces percolate up from time to time, much like a river that goes underground only to pop up in unexpected places. Two events slated for early October — the UCP leadership race, which has the effect of replacing Alberta’s premier, and Quebec’s provincial election, which seems likely to strengthen Premier Legault’s hand — both have the potential to stir up emotions on energy.

Danielle Smith, likely Alberta’s next premier, is talking about sovereignty-association, using Quebec as her template. With hydrocarbon prices soaring, oil and gas revenues are pouring into the Alberta treasury and the now fabulously rich UCP government is using the surplus to pay down debt. A robust financial foundation for talk of sovereignty-association is inciting some of the same “turn-off-the-tap” instincts that a more progressive Conservative premier, Peter Lougheed, gave voice to 50 years ago in response to Pierre Trudeau’s confiscatory National Energy Plan.

In these extraordinary times, political actors in Ottawa seem oblivious to the sentiments being stirred up by the combination of their new edict for emissions caps on Canada’s oil and gas sector and their evident unwillingness to stand up to Quebec. Of all people, Guilbeault, the guy who scaled Toronto’s CN Tower to unfurl a gigantic Greenpeace sign accusing Canada and the U.S. of being “climate killers,” should understand how citizens can be incited into taking matters into their own hands.

Insecurity and maybe, this winter, even chaos in Europe are expected to accelerate the design of more efficient battery storage, and in the long term that innovation may end the use of hydrocarbons to power engines. But for now a world hungry for our hydrocarbons needs Canadians to work out the obvious domestic energy deal the planet needs from us.