Will Albertans End Up Paying for Foreign Carbon Preening?

Investing in renewables in Alberta is a great deal for investors.
But what are Albertans actually getting for their money? 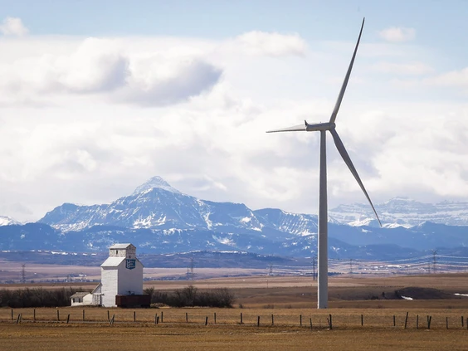 On Feb. 10, while most of us were holding our breath watching the standoff between protestors, politicians and police, the Alberta Utilities Commission (Alberta’s electricity regulator) quietly announced its approval of Buffalo Plains Wind farm, an enormous installation on 17,500 acres of privately held farmland near the village of Lomond in southern Alberta. The project includes 83 giant wind turbines close to 200 metres tall and a business plan of offsets to be sold to carbon-producing companies that have promised to be net-zero by 2030-40 (which these days seems to be just about all companies). The developer, Germany’s ABO Wind, has a proven business model of generating carbon credits for purchase by private-sector companies like Amazon in places like California in order to offset their carbon footprint.

None of what ABO Wind proposes is illegal. Provincial policy encourages such investment — as we are fond of saying here: “Alberta is open for business.” And filings to the Utilities Commission reflect support from local landowners and municipal authorities in Lomond. These groups welcome the infusion of new revenue streams into their public and private coffers.

And, of course, anyone who dares question “green” or inquire about the stickiness of German investment dollars in Alberta, or who raises an eyebrow about the logic of building a standing army of giant turbines as tall and nearly as wide as the Calgary Tower, or who grumbles about the public cost of building out more electricity transmission infrastructure to assure zero congestion on the wires, risks public and personal censure because these days there is no greater good than green in the former petroleum paradise of Alberta.

But green can be a curse if it’s not done well. And the problem is not just the off-putting aesthetics of renewable energy infrastructure.

Regulatory watchdogs including the Market Surveillance Administrator (MSA), an independent monitor of Alberta’s electricity and retail natural gas markets, also seem to be questioning motives. Tucked into a standard-issue 2021 quarterly report, the MSA observes (in tech-speak): “For wind generation assets, assuming an increasing carbon price in the presence of the current emissions benchmark, the revenue from the sale of environmental attributes (i.e., carbon credits) may be sufficient in the future to cover all generation costs without the need for any revenue from the sale of electricity in the power pool.” In other words, delivering green electricity is not necessarily the primary goal for investments in wind generation in Alberta. Instead, foreign investors may be lining up to invest because the province provides unique benefits to these investors.

Such benefits include the opportunity for private-sector electricity generators to fully invest in projects within Alberta’s largely open, deregulated market — which may more than offset the fact that the provincial government is not an investment partner. As well, if any additions or upgrades to the province’s regulated transmission system are required to accommodate solar and wind resources, which are often based in rural areas, Albertans are fully on the hook.

Put simply, when Amazon, Budweiser or any other ESG-conscious foreign company needs carbon offsets to “green” its energy consumption, it can build or fund a wind farm in Alberta, freely access the province’s transmission grid, and earn emissions credits anytime the facility produces electricity. And notwithstanding that the value of these credits is generated in Alberta (and the cost of carbon is passed along to the province’s electricity consumers), the offsets can be exported for use in other jurisdictions.

Investing in renewables in Alberta is a great deal for investors. But that begs the question: “What are Albertans actually getting for their money?”

Cheaper electricity? That’s debatable. The utilization rate for wind energy is relatively low compared to other electricity generation sources, while transmission costs remain fixed. Alberta’s electricity system operator mandates that wires be built out to maximum capacity for every facility, which helps explain why transmission costs in the province are among the highest in North America. As well, wind turbines and solar panels are largely fabricated outside the province and operating them is not very labour-intensive: Canada’s largest solar project, requiring 3,300 acres in southern Alberta, will provide just ten full-time jobs, according to the developer.

As an early proponent of renewables and one of Canada’s first provincial ministers to be given responsibility for this portfolio, I support carbon-reduction strategies and investments. But it would be naive to ignore the warning signals. Are all champions of green energy primarily concerned with reducing greenhouse gas emissions, or is some of this a smokescreen for making money and burnishing private- and public-sector reputations?