Trudeau and Biden need to talk about oil

When gasoline prices hit $3 a litre, political leaders won’t be able to ignore the public backlash 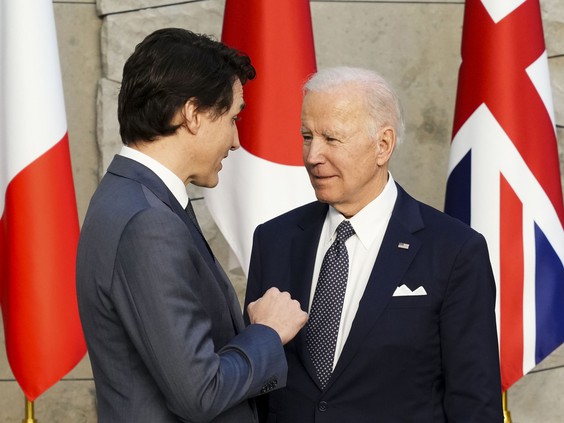 A crisis is hardly a time for tentativeness and holding back. No one knows how high energy prices will go if Russia’s aggression in Ukraine cannot be constrained. And what happens when oil supplies simply don’t meet demand? Rationing gasoline is not fun public policy. It’s fine to tap into a strategic reserve, as the Americans are doing, but if you want to talk real reserves, Canada’s are world-class. So why aren’t Joe Biden and Justin Trudeau talking about oil?

A certain initial reticence is understandable.

Justin Trudeau squirms whenever the question of bumping up domestic hydrocarbon production arises. It risks undermining his government’s marquee climate-change agenda. When asked by EU reporters if Canada would deploy its petroleum sector to help Europe reduce dependence on Russian oil, he pointedly responded by talking about the need to decarbonize. And in the federal government’s first Emissions Reduction Plan, released last week (not to Parliament but to the GLOBE Forum in Vancouver) Trudeau put the oil and gas sector on notice: emissions will be reduced to 40 per cent lower than 2005 levels by 2030, with the aim of reaching net-zero by 2050. War or no war, new strategic confrontation with Russia or not, Canada’s real fight is climate change, full stop.

As for the Americans, maybe they believe they will have access to Canada’s energy resources as and when needed. Hence there’s really no need for a formal ask. Recall the post 9/11 energy plan of George W. Bush (drafted by vice-president Dick Cheney). It included Alberta’s oilsands as a “pillar of sustained North American energy and economic security” (emphasis supplied). Canadian energy is tightly integrated into continent-wide infrastructure and markets. Most of the barrels pumped out of Alberta’s oilsands are shipped to the United States for American consumers — though a growing number are re-exported from the U.S., including to Europe.

At the best of times, of course, public disagreement between American politicians and Canadian hydrocarbon producers and shippers is uncomfortable. Biden’s decision to cancel TC Energy’s Keystone XL pipeline expansion on his first day in office is the clearest example of that. And then there is all that evidence about U.S. funding of anti-oilsands campaigns, dug up by forensic accountant Steve Allan in his report to the Alberta government. Although we haven’t heard much lately from Michigan Gov. Gretchen Whitmer, her campaign to shut down Line 5, an Enbridge pipeline under the Straits of Mackinac, got very scrappy. Perhaps it’s just better for good neighbours to sweep these disputes under the table.

But that would be a mistake. Pussy-footing around may have worked in the past, but if oil supply remains wonky and the price of gasoline at the pumps continues to skyrocket, politicians in both the U.S. and Canada will have no choice but to get very explicit about the logistics of rebooting Canada’s capacity to backstop North American and even world energy supply. Ottawa may not have fully understood what the truckers’ convoy was about, but when gasoline prices hit $3 a litre, political leaders won’t be able to ignore the public backlash. It will no longer be a crisis happening “over there.” It will be happening right here at home.